See all Things to do in Dharamshala

17th Karmapa (Dalai Lama's alternative residence). A temporary residence is at the Gyuto Tantric University in the town of Sidhbari near McLeod Ganj. The Karmapa, spiritual head of the Karma Kagyu school which is one of the four sects of Buddhism, fled Tibet and sought refuge in India in January 2000. He has mostly lived in the Gyuto Tantric monastery in Sidhbari near Dharamsala - the seat of the Tibetan government-in-exile. Considered the third most important Tibetan religious head after the Dalai Lama and the Panchen Lama, the Karmapa's activities have been under the scanner following reports of his alleged links with the Chinese authorities. 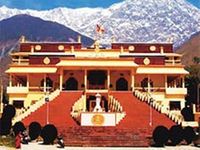 If you have been to 17th Karmapa, share your experience

Top things to do in Dharamshala

Best places to eat in Dharamshala

Must see in Dharamshala