See all Temples in Macau

A-Ma Temple, which is situated on the southwest tip of the Macau Peninsula, is one of the oldest and most famous Taoist temples in Macau (Macao). Built in 1488, A-Ma Temple is one of the sites designated Historic Centre of Macau. The name Macau is thought to be derived from the name of the temple. The temple was well described in ancient Chinese texts, as well as represented in paintings. Entering the temple and going across a gateway, you will reach the Hongren Hall by a winding path.It is also one of the first scenes photographed in China. 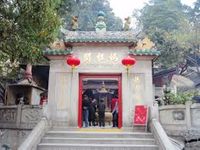 If you have been to A-Ma Temple, share your experience