See all Pubs in Rome

The Antico Caffè Greco is an historic landmark café which opened in 1760 on 86, Via dei Condotti in Rome, Italy. It is perhaps the best known and oldest bar in Rome and within Italy only Caffè Florian in Venice is older.The café was named after its Greek (Greco in Italian) owner, who opened it in 1760.Historic figures including Stendhal, Goethe, Bertel Thorvaldsen, Mariano Fortuny, Byron, Franz Liszt, Keats, Henrik Ibsen, Hans Christian Andersen, Felix Mendelssohn, Wagner, Levi, María Zambrano and even Casanova have had coffee there.Featured as a setting in the 2013 novel The Cana Mystery,today Caffe Greco remains a haven for writers, politicians, artists and notable people in Rome. 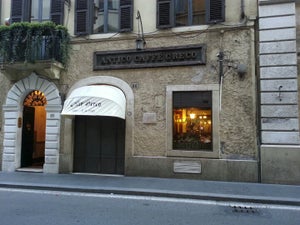 If you have been to Antico Caffe Greco, share your experience