See all Wildlife in Sharjah

The Arabian Wildlife Center is the only 'zoo' in Arabia which exhibits all the animals naturally occurring in the Arabian Peninsula, both current and extinct. Opened in September 1999, this excellent facility houses over 100 species displayed in safe, spacious and natural surroundings. The center demonstrates the diversity of the fauna found in the peninsula and creates awareness of the species, which have, and are, becoming extinct. Take time to view the video just inside the main entrance before entering the display areas. The tour takes you through the reptile, fish and insect house, where many of the Arabian snakes including the venomous vipers and adders, monitor lizards and chameleons plus common insects such as camel spiders and scorpions are exhibited. 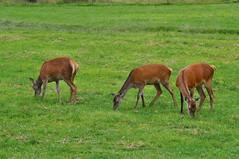 If you have been to Arabian Wildlife Center, share your experience