See all Monuments in Jammu

Bahu Fort is among the popular sightseeing attractions of the city of Jammu, which was built by Raja Bahulochan over 3,000 years ago. The fort was later restored during the 19th century by the Dogra rulers. Other notable attractions of the fort include Bahu Temple, a shrine dedicated to Goddess Kali. The fort stands on a plateau overlooking Tawi River with the surroundings developed into a well laid garden known as Bhave ki Bahu. Bhave ki Bahu is laid on the lines of the Mughal Gardens from where tourists can have a bird's eye view of Jammu city. An ancient fort is placed within the thick sandstone walls and features eight octagonal towers with enclosures to house guards. There were several reconstructions from time to time in the fort; the last was done by Maharaja Gulab Singh in the 19th century. 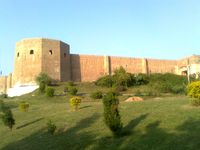 If you have been to Bahu Fort, share your experience

Top things to do in Jammu

Best places to eat in Jammu

Must see in Jammu