See all Museums in Bangkok

The Bank of Thailand Museum was conceptualized as long as 30 years ago when the Bank of Thailand had appointed a special working group to establish a museum in 1978. However, the idea stayed dormant for several years and only until the renovation of the Main Mansion and the Royal Mansion was completed, the Bank of Thailand Museum Project started to set in motion.    One of the Museum's primary objectives is to preserve the legacy of the Thai money which is an important cultural heritage showing the evolution of Thai Kingdom. The Museum is also intended to serve as a stimulus for the research and study of the evolution of the Thai money.  The exhibits cover the historic development of Thai money as a medium of exchange: ancient money from the Funan, Davaravati, and Sri Vijaya Kingdoms; Pot Duang; Thai coins; Thai banknotes, money from the north (Lanna money) and the northeast (Lanchang money).  In addition, an exhibit showing the history of the Bank of Thailand, its roles and responsibilities has also been displayed. Important events in the history of the Bank during the past 60 years are listed in chronological order. This covers the establisment of the Thai National Banking Bureau, the promulgation of the Bank of Thailand Act 1942, the appointments of all the governors, the relocation of the office premises, the opening of the Bank's branches, and the implementation of various important monetary policies over time. The life, works, activities, the talents of H.R.H Prince Paripatra Sukhumbhand, Prince of Nakornsavarn and artistic values in architectural and decorative designs of Bangkhunprom Palace are also displayed in the Museum.     The exhibition style of the Museum derived from a concept of edutainment that the Museum should educate as well as entertain the public. Items on display include old photos and antiques. New techniques and technology are also employed such as the diorama technique, computer graphics, and multimedia. 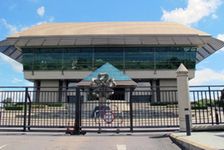 If you have been to Bank of Thailand Museum, share your experience