See all Churches in Rome

The Basilica of St. John Lateran is the oldest Christian church in the world and was commissioned by Constantine the Great. The cathedral was dedicated to the Savior on November 9, 318. Pope Sergius III added John the Baptist to the basilica's dedication in the 10th century. Pope Lucius II added John the Evangelist in the 12th century.  There is an apse bowl which has a mosaic with God appearing on the upper part. Below is the Virgin Mary. To her left are the figures of Paul and Peter and St. Francis on a small scale. To her right are St. John the Baptist, St. Andrew, St. John the Evangelist and St. Anthony of Padua on a small scale. 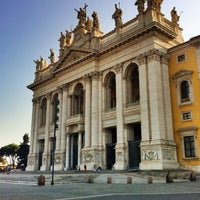 This is the Mother Church of Christanity.so dont't miss to visit this church.

If you have been to Basilica di San Giovanni in Laterano, share your experience