See all Activity Place in Singapore

Boat Quay is a historical quay in Singapore which is situated upstream from the mouth of the Singapore River on its southern bank. It was the busiest part of the old Port of Singapore, handling three quarters of all shipping business during the 1860s. Because the south bank of the river here resembles the belly of a carp, which according to Chinese belief is where wealth and prosperity lay, many shophouses were built, crowded into the area. Though serving aquatic trade is no longer Boat Quay's primary role, the shophouses on it have been carefully conserved and now house various bars, pubs and restaurants. Therefore Boat Quay's social-economic role in the city has shifted away from that of trade and maritime commerce, and now leans towards more of a role accommodated for tourism and aesthetics for the commercial zone of which encloses the Singapore River. It is the soft front to the composolitian banking and financial sectors lying immediately behind it. 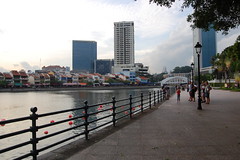 "An absolutely fascinating place to visit. Its lit up brilliantly in the night with plenty of food options and vibrant atmosphere" - By Paul Iacono, 04 Nov 2013 5
Add to Wish List
2 wishlists

"An absolutely fascinating place to visit. Its lit up brilliantly in the night with plenty of food options and vibrant atmosphere" - By Paul Iacono, 04 Nov 2013

If you have been to Boat Quay, share your experience

Top things to do in Singapore

Best places to eat in Singapore

Must see in Singapore