Bombay Dyeing is the flagship company of the Wadia Group, engaged mainly into the business of Textiles. Bombay Dyeing is one of India's largest producers of textiles. Its current chairman is Nusli Wadia.In March 2011, Jeh Wadia , the younger son of Nusli, has been named the managing director of Wadia Group's flagship, Bombay Dyeing & Manufacturing Company, while the elder son, Ness  has resigned from the post of joint MD of the company. Ratan Tata, the ex-chairman of Tata group was on the board of directors till 2013. He resigned and Cyrus Mistry took over. 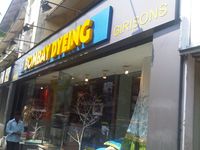 If you have been to Bombay Dyeing, share your experience

Top things to do in Aurangabad

Best places to eat in Aurangabad

Must see in Aurangabad