The Arabic word Masjid (mosque) literally means a place of prostration. A mosque is a place of worship for followers of Islam and serves as a place where Muslims come together for prayers as well as a centre for information and religious education. Mosques originated on the Arabian Peninsula, but are now found in all inhabited continents as Muslims moved to other parts of the world. 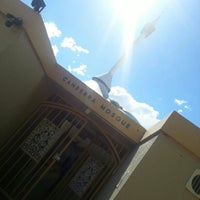 If you have been to Canberra Mosque, share your experience

Top things to do in Canberra

Best places to eat in Canberra

Must see in Canberra