See all Activity Place in Cairns

Cape Tribulation is located in the heart of the Daintree National Park World Heritage Area which contains the oldest continually surviving tropical rainforests in the world. Estimated to be over 100 million years old, the Wet Tropics area is home to around 50% of Australia's plant and animal species with many species found nowhere else in the world. The drive between Cairns and Cape Tribulation weaves its way past beautiful white sandy beaches and some of the most picturesque scenery in Australia. Cape Tribulation itself has population of only 103 residence and their eco-friendly accomodation is set beautifully amongst flora and fauna of the rainforest. 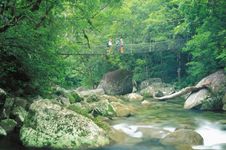 If you have been to Cape Tribulation, share your experience

Top things to do in Cairns

Best places to eat in Cairns

Must see in Cairns