Castella de Aguada  also known as the Bandra Fort, is a fort located in Bandra, Mumbai. "Castella" is a misspelling for Portuguese "Castelo". Properly, it should be called Castelo da Aguada, although it seems its Portuguese builders actually called it Forte de Bandorá. It is located at Land's End in Bandra. It was built by the Portuguese in 1640 as a watchtower overlooking Mahim Bay, the Arabian Sea and the southern island of Mahim. The strategic value of the fort was enhanced in 1661 after the Portuguese ceded the seven islands of Bombay that lay to the immediate south of Bandra to the English. The name indicates its origin as a place where fresh water was available in the form of a fountain ("Aguada") for Portuguese ships cruising the coasts in the initial period of Portuguese presence. The fort lies over several levels, from sea level to an altitude of 24 metres. Castella de Aguada has been featured in several Hindi films, such as Dil Chahta Hai and Buddha Mil Gaya 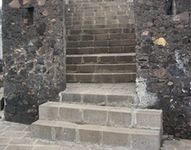 If you have been to Castella de Aguada, share your experience

Top things to do in Mumbai

Best places to eat in Mumbai

Must see in Mumbai