See all Attractions in Xian

City Wall of Xi'an (è¥¿å®åå¢; XÄ«ÄnchÃ©ngqiÃ¡ng), [3]. As the world's largest city wall, the Xi'an city wall has been restored and is 12m high, 18m wide is its bottom, 15m wide on the top, 13.7km long, and bikes(also bikes for two or three persons) are provided for renting, now it's ï¿¥40 per 90 minutes/bike. You can hire one at the top of the South or East gate; you may return it to other stations on the wall (there is one at each of the four main gates), but be sure to verify this before stating your ride. Be aware that bikes will not be rented if there is any chance of rain, because the top of the wall becomes slippery. Check the weather forecast before you buy a ticket to enter the wall. If you want to foot it though, a complete loop of the walls takes 4-5 hours. The landscaped park around the base of the exterior walls and moat also makes for a pleasant stroll and gives a different perspective on the battlements and towers. The wall is lit up at night and makes for a pleasant stroll. The present city wall was built in the Ming dynasty(A.D.1368-A.D.1644) on the foundation of the Chang'an Imperial city wall of Tang dynasty(A.D.618-A.D.907). The Xi'an City Wall International Marathon is held each year in Nov. since 1993, running on top of the wall, athletes from amore than 50 countries and regions have participated in the competition during the last 16 sessions. Also, the Xi'an city wall Cycling Race are held on top of the wall since two years ago. The entrance to Xi'an City Wall Museum,Xi'an,China An inside view of Xi'an City Wall museum,Xi'an,China There is a small museum inside the city walls at Hanguang Gate, about halfway between the southwest corner and the South Gate, accessible from the top of the city wall itself. Look for a staircase down inside a covered structure. Inside are the unrestored remains of a gatehouse and a calligraphy collection. Â¥40, Â¥20 students (Sept 2010). 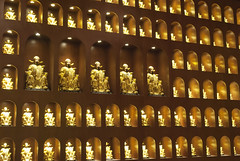 If you have been to City Wall of Xi'an, share your experience