The 'Conflictorium' is India's first participatory museum that revolves around the theme of conflict. Using art as a medium, the museum has managed to create a space which allows the visitor to engage in a process of meaning making.The various installations in the museum have moved me so that being inside the building completely diminishes the effect of the noisy/fast track appearance of the city. 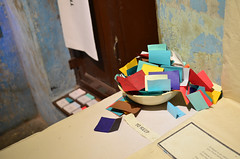 If you have been to Conflictorium, share your experience