Dodger Stadium is one of Southern California's most treasured landmarks and the 2008 baseball season will mark the Dodgers 47th year at Chavez Ravine. More than 125 million fans have visited the ballpark since it opened in 1962 awing spectators with a breathtaking view of downtown Los Angeles to the south; green, tree-lined Elysian hills to the north and east; and the San Gabriel Mountains beyond. The 56,000-seat Dodger Stadium has parking for 16,000 automobiles on 21 terraced lots adjacent to the same elevations as the six different seating levels. More than 3,400 trees cover the 300 acres of beautiful landscape, which is maintained by a full-time staff of gardeners. The Dodgers employ a full-time grounds crew and maintenance staff that keeps all aspects of the stadium in immaculate condition throughout the season making Dodger Stadium one of the best maintained facilities in the country. The Dodgers installed a brand new state-of-the-art grass field after the conclusion of the 1995 season. Prescription Athletic Turf (PAT), created and installed by the Cincinnati-based Motz Group, used the latest agronomic and engineering technology to manage field moisture through controlled drainage and irrigation. The 100,000 square feet of bermuda grass is grown on pure sand, beneath which a vacuum chamber is laid over a water-tight plastic barrier that forcibly extracts water during heavy rains. New moisture gauges monitor the field's water level in coordination with a microprocessor that controls drainage functions. A computer controller has the ability to reverse the scenario and subirrigate when the sand's moisture reading drops below the optimal level. Clearly, the changes have paid off, as the Dodger Stadium field was named the best in baseball by Sports Illustrated in 2003 in a poll of Major League players. Of the responses, 23.2 percent of players rated Dodger Stadium as the best-quality playing field, more than twice as many as any other stadium. At the gates, an average of more than 2.79 million fans have watched Dodger games at Dodger Stadium per season during the past 45 years. In 1978, Dodger Stadium became the first ballpark to host more than three million fans in a season when the Dodgers drew 3,347,845 in attendance. Following another three-million attendance mark in 1980, the Dodgers set the all-time Major League season attendance record in 1982, drawing 3,608,881 fans. Toronto, Colorado and Atlanta have since topped that mark, but the Dodgers can also boast seasons of more than three million in attendance from 1983-86, 1990-91, 1993 and 1996-2006. Nine of the top 25 NL single-season attendance marks have been recorded at Dodger Stadium. During the 20th century, the only privately-financed ballparks in Major League Baseball were Yankee Stadium (built in 1923) and Dodger Stadium. Walter O'Malley and architect Emil Praeger set the stage for baseball's most popular and beautiful showplace when they began designing the Dodgers' new home. The stadium opened its doors on April 10, 1962 and the Dodgers won their first game at their new home the next day on April 11 when they defeated the Cincinnati Reds, 6-2. The Dodgers drew 2,755,184 fans at Dodger Stadium during its inaugural season. Since then, Dodger Stadium has hosted eight World Series and the Dodgers have won four World Championships (1963, 1965, 1981 and 1988), eight NL pennants (1963, 1965, 1966, 1974, 1977, 1978, 1981, 1988), nine NL Western Division crowns (1974, 1977, 1978, 1981, 1983, 1985, 1988, 1995, 2004) and two NL Wild Card berths (1996, 2006). The stadium hosted the Major League Baseball All-Star Game in 1980 and the Olympic Games' baseball competition in 1984. The eight-team competition during the 1984 Olympic Games marked baseball's greatest involvement in the Olympic Games to that point. The Olympic spirit returned to Los Angeles again in 1991, as Dodger Stadium hosted the Opening Ceremonies for the United States Olympic Festival. Later that summer, the st 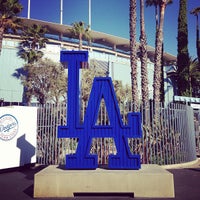 If you have been to Dodger Stadium, share your experience