See all shopping in Shanghai

A 20-minute walk south from Lu Xun Gongyuan (Lu Xun Park and Memorial Hall) is Duolun Lu, Shanghai's culture street, an attraction opened in 1998, angling off Sichuan Bei Lu in the historic Hongkou District. This district north of the Bund was the original American Concession but merged with the British Concession to form the International Settlement in colonial Shanghai. By the time the writer Lu Xun moved into the neighborhood in the 1930s, the area had become a Japanese enclave. Other famous progressive artists and writers (Mao Dun, Guo Moruo, Ding Ling), many of whom were part of the League of Leftist Writers, lived here as well during that time, making this area around Duolun Lu (formerly Darroch Rd.) known as a cultural and literary center. The stately brick homes and shops on this .8km ( 1/2-mile) stretch of the street have been preserved and refurbished, and cars are now banned, making it a fine pedestrian mall of bookshops, teahouses, antiques shops, and historic homes. As you enter from Sichuan Bei Lu, the Duolun Museum of Modern Art (no. 27; tel. 021/6587-2530; www.duolunart.com; Tues-Sun 10am-6pm; admission ¥10/$1.45/73p) on your left showcases the works of international modern artists. A few doors down at no. 59, Hong De Tang (Great Virtue Christian Church) is a church built in 1928 with upturned Chinese eaves. The street curves to the right, passing the stately bell tower Xi Shi Zhong Lou (no. 119); the wonderful Old Film Cafe (no. 123), where you can sip coffee while watching old Chinese movies from the 1920s and 1930s; and antiques and curio shops selling everything from art to Mao memorabilia. At Lane 201, no. 2 is the League of Leftist Writers Museum (9:30am-4pm; admission ¥5/70¢/35p). The last architectural treasure on the curving lane is the Kong Residence, a splendid 1924 creation sadly not open for public viewing. The street is not really worth a special trip out here, but if you're interested in Shanghai's colonial architecture, or if your travels take you to Hongkou, then Duolun Lu is a must. 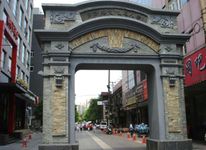 If you have been to Duolun Lu Culture Street (Duolun Lu Wenhua Jie), share your experience