This historic district was built in the 1930s on the site where the city was founded, as an alternative to the razing of a particularly unsightly slum. The result is a contrived nostalgic fantasy of the city's beginnings, a kitschy theme park portraying Latino culture in a Disney-esque fashion. Nevertheless, El Pueblo has proven wildly successful, as L.A.'s Latinos have adopted it as an important cultural monument. El Pueblo is not without authenticity. Some of L.A.'s oldest buildings are here, and the area really does exude the ambience of Old Mexico. At its core is a Mexican-style marketplace on old brick-paved Olvera Street. On weekends the carnival of sights and sounds is heightened by mariachis, piñatas, and more-than-occasional folkloric dancing. Olvera Street, the district's primary pedestrian street, and adjacent Main Street are home to about two dozen 19th-century buildings. Free 1-hour walking tours are given Tuesday through Saturday; for tour times contact El Pueblo Visitor Center (622 N. Main St.; tel. 213/628-1274; www.lasangelitas.org). Also, don't miss the Avila Adobe, at E-10 Olvera St. (Mon-Sat 10am-5pm; free admission); built in 1818, it's the oldest building in the city. 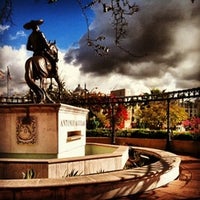 If you have been to El Pueblo de Los Angeles Historic Monument, share your experience