See all Things to do in Singapore

The area south of the mouth of the Singapore River was swamp until land reclamation in the mid-1820s rendered it fit for building. Within just a few years, Commercial Square here had become the colony's busiest business address, boasting the banks, ships' chandlers and warehouses of a burgeoning trading port. The square was later Singapore's main shopping area until superseded by Orchard Road in the late 1960s; today the square, now called Raffles Place, forms the nucleus of Singapore's Financial District (also referred to as the CBD, or Central Business District). Until recently, if the area figured in the popular imagination at all, it would have been because of the rogue trader Nick Leeson, whose antics here brought about the Barings Bank collapse of 1995, though his transgressions seem like small beer when set against the global financial improprieties of recent years. East of here, the southern jaw of Marina Bay, Marina South, is home to yet more banks and features risk-taking in a different vein as the site of the striking Marina Bay Sands hotel and casino. 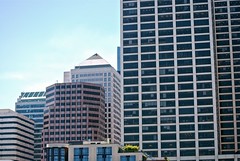 If you have been to Financial District, share your experience

A Short Break in Singapor...

Top things to do in Singapore

Best places to eat in Singapore

Must see in Singapore