See all beach in Hobart

The  Cape Tourville Lighthouse  is an unmanned, automatic light, lighthouse built in 1971. The lighthouse replaced the  Cape Forestier Lighthouse which had been situated on another jutting off the  Freycinet Peninsula  known as Lemon Rock. Cape Tourville can be found in Freycinet National Park on the east coast of Tasmania. It is one of Tasmania's wilderness beauty spots with stunning coastal views, dramatic granite sea cliffs and an unmanned lighthouse. The Cape Tourville lighthouse can be reached by a 6.4km dirt track and provides a relatively easy walk to lookout across to Lemon Rock and along the Freycinet Peninsula. Scenery is less stark than other wilderness areas such as Cradle Mountain, but no less spectacular. 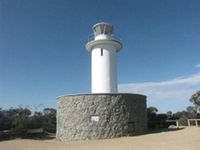 If you have been to Four Wheel drive to Cape Tourville Lighthouse, share your experience