See all Things to do in Vadodara

Enjoy the City tour by visiting Laxmi Vilas Palace. The Laxmi Vilas Palace was the official residence of the erstwhile Maharajahs of Baroda. Though a little down at heel and run down, the palace still has impressive interiors done up with Venetian glass, crystal chandeliers, Italian marble and mosaic and find porcelain and marble statues from Europe. The tiered step-well called the Naulakhi Baoli which got its name because of the fact that it could store 9million gallons of water is near the palace. Champaner - This city, located at 47 K in the north-east of Vadodara, was conquered in 1484 by Sultan Mahmud, and he renamed Begara Muhammadabad. Named World Heritage Site by UNESCO, counts 114 monuments of historical and archaeological interest, among them stand the mosque of Jama Masjid, for its impressive interior courtyard, its porches, beautiful arches and slender minarets. Worth a visit Shahr Masjid, with its row of columns, domes and delicate mihrab (niche facing Mecca) and Nagina Masjid with a charming porch; beside the village is built on three levels of the Pavagadh Hill, a hill topped by the ruins of a fortress. According to Hindu legend, the hill would be a fragment of the Himalayas that the Monkey God Hanuman took away with him to Lanka in one of the episodes recounted in the epic Ramayana - hence the name Pavagadh, which means "quarter of a hill." 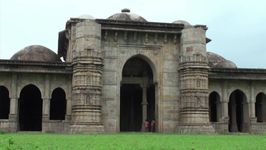 If you have been to Full Day City Tour with Pvt Transfers(Laxmi Vilas Palace and Nagina Masjid), share your experience

Top things to do in Vadodara

Best places to eat in Vadodara

Must see in Vadodara