See all Things to do in Kochi

The tour starts with the breathtaking trip to City tour in & around the kochi city like historical towns of Fort Cochin & Mattancherry which consists of wonderfully built atmosphere - thick with the smell of the past. Jewish Synagogue - a 400-year old synagogue. Enter the synagogue & the large main hall arrests your attention with display of rare antique objects that add to the grandeur of the place. Secondly, The St. Francis Church well-known for its beautiful architecture & ambience & is believed to be one of the oldest churches built by the Europeans in India. Santa Cruz Basilica - one of the eight Basilicas in India, this church is one of the finest & most impressive churches & visited by tourists the whole year round. Vasco House (built in the Portuguese style of architecture) is believed to be the house where Vasco Da Gama stayed during his visits to Kochi, right until his death in 1524. Later visit Fort Kochi beach & Chinese Fishing Nets - Nowhere else in India could you find such giant fishing nets from China. 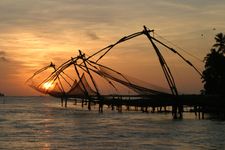 If you have been to Full Day Sightseeing Tour, share your experience

Top things to do in Kochi

Best places to eat in Kochi

Must see in Kochi