See all Things to do in Perth

The Shoalwater Islands Marine Park is located 50 kilometres south of Perth, adjacent to the City of Rockingham and covers an area of approximately 6658 hectares. The park starts in the south at Point Becher, it extends approximately 3 kilometres offshore and encompasses the chain of limestone rocks and islands (including Penguin Island) that runs parallel with the coastline.The cavernous reefs surrounding the islands provide good snorkelling and diving. The reef areas support a variety of temperate and subtropical invertebrates including sea stars, urchins and molluscs as well as a number of fish species. Bottlenose dolphins are extremely common in the park's waters. 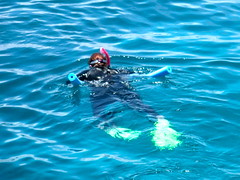 If you have been to Go snorkelling in Shoalwater Marine Park, share your experience