See all Mosques in Dubai

The Grand Mosque is a mosque in Dubai, United Arab Emirates. It is located between the textile souk and the Dubai Museum close to a small stream in the Bur Dubai area, just south of the Hindu Temple. Originally built in 1900, demolished and built again in 1960, it then underwent a further rebuilding in 1998 (the present one). It now holds up to 1,200 worshippers. Non-Muslims are not allowed to enter the mosque, except the minaret from where photography is permitted.The mosque is the hub of Dubai's religious and cultural life. 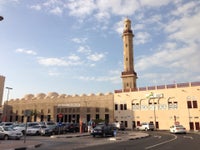 If you have been to Grand Mosque, share your experience