See all Things to do in Varkala

The tour starts by covering several places of interests like a Beautiful beach, a 2000-year-old Vishnu Temple & the Ashramam - Sivagiri Mutt. The Papanasam beach (also called as Varkala beach) is renowned for the natural spring. It is considered to have medicinal and curative properties. A dip in the holy waters at this beach is believed to purge the body of impurities and the soul of all sins. Secondly visit the 2,000-year old Janardana Swami Temple which is an important Vaishnavaite shrine in India. The temple is located close to the Papanasam beach, which is considered to have holy waters which wash away sins. The temple has an ancient bell removed from a shipwreck, donated by the captain of the Dutch vessel which sank near Varkala without causing any casualties. The Sivagiri Mutt, founded by the great Hindu reformer Sree Narayana Guru & is also close by. The Samadhi (the final resting place) of the Guru here attracts thousands of devotees every year during the Sivagiri Pilgrimage days. 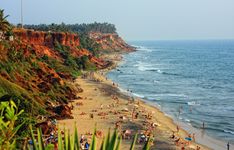 If you have been to Half Day Sightseeing Tour, share your experience

Top things to do in Varkala

Best places to eat in Varkala

Must see in Varkala