Enjoy the half day tour to Bhimtal Lake- it is a lake in the town of Bhimtal, in the Indian state of Uttarakhand. It is the largest lake in the only real lake district of India. It is a perennial lake which not only supports a large variety of aquatic life but is a winter stopover for Trans Himalayan birds and later proceed to visit Sattal Lake - Sattal or Sat Tal (Hindi for "seven lakes") is an interconnected group of seven freshwater lakes situated in the Lower Himalayan Range near Bhimtal, a town of the Nainital district in Uttarakhand, India. During the British Raj, the area had a tea plantation, one of four in the Kumaon area at that time.The lakes sit at an altitude of 1370 metres below lush orchards in the Mehragaon valley. 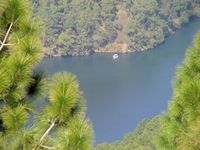 If you have been to Half Day Sightseeing Tour with Pvt Transfers(Bhimtal Lake & Sattal Lake), share your experience

Top things to do in Bhimtal

Best places to eat in Bhimtal

Must see in Bhimtal