See all Things to do in Mussoorie

Enjoy your half day sightseeing tour visiting Kempty Falls- this falls was developed as a tourist destination by a British officer John Mekinan, around 1835. The name Kempty is probably derived from the word 'camp-tea', as the British, during the colonial rule, would organize their tea parties here. Later proceed to visit Gun Hill is one of the popular tourist attractions of Mussoorie, possessing historical significance dating back to pre-independence. It is believed that a canon was fired from the place at a fixed time on every afternoon. This firing at the hill provided an idea of time to the local residents of the destination and they adjusted their watches accordingly. 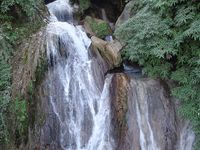 If you have been to Half Day Sightseeing tour with Pvt Transfers(Kempty Falls & Gun Hill), share your experience

Top things to do in Mussoorie

Best places to eat in Mussoorie

Must see in Mussoorie