Formerly called Willemskerk, this beautiful church with a domed roof was built in honor of King Willem I of the Netherlands. He was renowned for his numerous efforts to unite the various denominations of Christianity under one crown. The organ that is still being played today dates back to 1843, while the Bible was printed in 1748. The church's name was changed to Immanuel (God will be with us) in 1948. It conducts services in Bahasa Indonesia, Dutch and English. 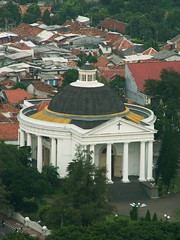 If you have been to Immanuel Church, share your experience

Top things to do in Jakarta

Best places to eat in Jakarta

Must see in Jakarta