The India Gate, originally called the All India War Memorial, is a war memorial located astride the Rajpath, on the eastern edge of the ceremonial axis of New Delhi, formerly called Kingsway. This landmark in Delhi commemorates the members of the erstwhile British Indian Army who sacrificed their lives fighting for the Indian Empire in the Afghan Wars and World War. After India got its independence, India Gate became the site of Amar Jawan Jyoti -Indian Army's Tomb of the Unknown Soldier. It is counted among the largest war memorials in India. 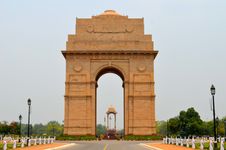 If you have been to India Gate, share your experience

Top things to do in Delhi

Best places to eat in Delhi

Must see in Delhi