Indira Gandhi Musical Fountain, the first computerized fountain in India situated opposite to the Jawaharlal Nehru Planetarium was inaugurated in 1995. Located in the heart of the city on the Raj Bhavan road in the old LRDE Complex and spreading over an area of 17 acres, it is one of the main tourist attractions in Bangalore.Based on the latest multimedia technology and fitted with 1000 nozzles, it has 15 formations and 27 combinations of fountains on a bed area of 30 meters by 10 meters. The visual delight of the light and sound show together with the synchronized rhythmic dancing of the fountains, provides high versatility in programming as well as in play back to various Indian and Western musical themes.

The distinct patterns formed by the musical fountain are projected into a big screen using a twin projector. Laser show is also performed here, which adds glamour to the musical fountain. Enjoy the sound and light show or stroll around the manicured park at Indira Gandhi Musical Fountain. Popular among local tourists, the park is spread over 17 hectares and has a play area for children.

The park uses energy generated from these non-conventional sources for powering lights in the evenings. This includes the beautiful, musical fountains with their multi-colored lighting. 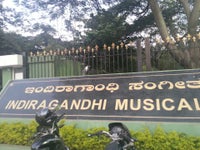 If you have been to Indira Gandhi Musical Fountain Park, share your experience