See all Things to do in Phuket

Joining a James Bond Island tour and cruise the Phang Nga Bay is the second most popular activity in the region. The area is situated 25 km north-east of Phuket. It consists of numerous dramatic limestone cliffs rising sheer out of the waters. The most famous one being James Bond Island with its needle formed limestone rock which featured in the James Bond movie "The Man with the Golden Gun". 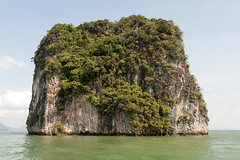 If you have been to James Bond Island Tour, share your experience