See all Mosques in Bijapur

The graceful twin minarets of Tipu's Jumma Masjid (1787) are decorated with an elegant arrangement of numerous pigeonholes, and terminate in bulbous domes above balconies. In modern times, processions assemble here before making their way across the island to Gumbaz and the ceremonies associated with the Tipu Urs (marking the anniversary of Tipu's death). Prayers are offered, both at the mosque and at the mausoleum, where Tipu's mark is still very evident in the painted bubris on walls and ceilings. At the mosque, these have only been revealed within the last 15 years, a delicate pattern previously hidden by successive layers of white paint. 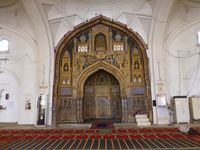 If you have been to Jumma Masjid, share your experience

Top things to do in Bijapur

Best places to eat in Bijapur

Must see in Bijapur