Kathakali, literally meaning `story-play', is a dance-drama originated in the 17th century in Kerala, one of the smallest states in India lying on the west coast of the Indian peninsula. Scholars are of opinion that Kathakali is the result of a fusion between all Indian theater tradition represented by Koodiyattom and the indigenous tradition of folk dance forms. 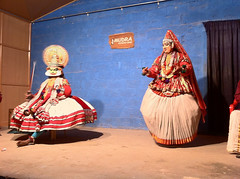 If you have been to Kathakali show, share your experience

Top things to do in Thekkady

Best places to eat in Thekkady

Must see in Thekkady