See all Pubs in Hong Kong

King Ludwig Beer Hall makes a somewhat clichéd attempt to recreate the raucous, beer-swigging atmosphere of a traditional German tavern. The large open-plan seating has a distinctly canteen feel, and the live Filipino band plays modern pop covers instead of German folk music. However, the food and drink succeed at bringing a little taste of Germany to Hong Kong. The mixed sausage platter and sauerkraut is a house special, and beer is poured by the liter. King Ludwig's also bakes a wide selection of their own fresh breads. This is a family-friendly restaurant and is a welcome alternative to the more risqué venues common throughout Wanchai district. -  James Reynolds 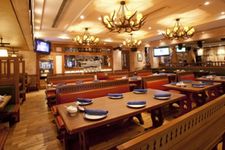 If you have been to King Ludwig's Beer Hall, share your experience