See all shopping in Perth

King Street is located in the CBD of Perth, Western Australia. The street has a very European feel with its early 20th century, low-rise architecture and restored facades. Commonly known locally as the start of the "West End" - it transverses two of Perth's major street Murray Street and Hay Street. King Street is home many flagship high-end stores such as Chanel, Louis Vuitton, Gucci, Prada, Bally, Georg Jensen, Tiffany & Co. and many other stores and cafes. Other High end retailers surround King street on Hay Street including - Burberry, Emporio Armani, Canali, Hugo Boss and Apple. 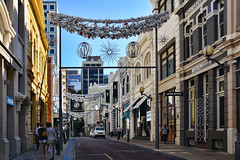 If you have been to King Street, share your experience