See all Attractions in Gurgaon

Kingdom of Dreams is India's first live entertainment, theatre and leisure destination. It is located in Sector 29, Gurgaon in NCR Delhi, near the Leisure Valley Park. It was inaugurated on January 29, 2010 by the Chief Minister of Haryana  and opened to public on September 18, 2010 by Union Minister of Tourism, Kumari Selja. The opening showcased a special preview of the Bollywood musical, Zangoora, starring Hussain Kuwajerwala, Gauhar Khan and Kashmira Irani. Spread over 6 acres (24,000 m2) and built at a cost of over Rs. 200 crore, Kingdom of Dreams is run by the Great Indian Nautanki Company (GINC), a joint venture between Apra Group and Wizcraft. 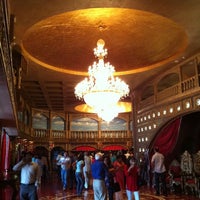 Travelers also viewed these places similar to Kingdom Of Dreams

If you have been to Kingdom Of Dreams, share your experience

Top things to do in Gurgaon

Best places to eat in Gurgaon

Must see in Gurgaon