The New South Wales Index consists of lighthouses built in a wide variety of styles used in that state over the last 180 years. Many of the New South Wales lighthouses have a common appearance, and are easily recognisable as being designed by the NSW colonial architect, James Barnet. Australia's oldest lighthouse, Macquarie Lighthouse, is also located in NSW, with the first tower built on South Head in 1818. 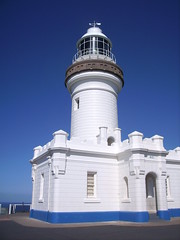 If you have been to Lighthouse Trail, share your experience

Top things to do in Byron Bay

Must see in Byron Bay