See all Activity Place in Kullu

The Malana - Chanderkhani Pass trek begins at Naggar after a short drive from Manali of the left bank of River Beas. After crossing the Chanderkhani Pass (3600m), this trek gets to the Malana village, famous for its distinct and very reserved social culture. Malana is a beautiful and picturesque village situated in the Manikarn valley. Malana stands out as an autonomous self- sufficient unit whose inhabitants claim Greek ancestry. They trace their ancestry to one of the lost armies of Alexander the great, who tried to unsuccessfully invade India in the 56BC. It is still a tribal village, and is considered as the oldest Democracy in the World. Leather is a taboo here and so is the touching of anything within the village. 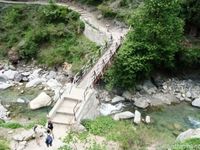 If you have been to malana village trek, share your experience

Top things to do in Kullu

Best places to eat in Kullu

Must see in Kullu