See all Temples in Goa

The Maruti temple is situated on top of the Altinho hillock overlooking  Fontainhas in Panaji, the capital of Goa. It is dedicated to Lord Hanuman, the monkey god and enshrines Lord Hanuman as the presiding deity.During the Portuguese regime, most Hindu temples were destroyed in a bid to promote Christianity. The Hindu community thus placed an image of the monkey-god Hanuman inside a fireworks shop and began offering prayers secretly. The image was replaced with a silver idol and after the Portuguese regime ended, it was built into a beautiful temple at the site of the shop. The doors have intricate carvings which are works of local artisans. The temple also has a beautiful teak wooden palanquin, used to carry out a procession of the central idol on auspicious days. 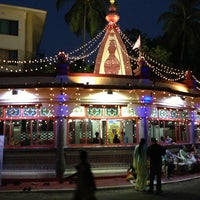 If you have been to Maruti Temple Miramar, share your experience