See all Mosques in Langkawi

Al-Hana Mosque is billed as the largest and most popular mosque in Langkawi. A peach-and-gold structure situated to the west of the picturesque Lagenda Langkawi Dalam Taman, along Persiaran Putra, the mosque is topped with a gold onion-shaped dome and enjoys a great location close to the waterfront.

Also known as Masjid Al- Hana, it is located in Kuah and the whitewashed shrine is close to many of the islandÃÂ¢ÃÂÃÂs best-known tourist attractions including Dataran Lang and the Kompleks Jeti Pelancongan. Plus, it is only a short walk away from many of KuahÃÂ¢ÃÂÃÂs duty-free stores. 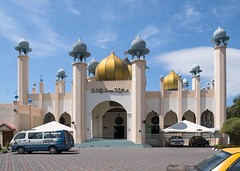 If you have been to Masjid Al-Hana, share your experience