See all Mosques in Medan

Al Mashun Grand Mosque is another prominent religious attractions in the city of Medan is located on Masjid Raya Street, about two hundred meters from the location of the Maimun Palace. Al Mashun Grand Mosque built in the reign of Sultan Al Rashid Perkasa Alamsyah Maâmum of the Deli Sultanate, the Sultanate of Deli land compensation fund that is used as a tobacco plantation area which was opened by a Dutch planter named Nienhuys in 1865.

Grand Mosque Al Mashun, with Moroccan-style design. Arstitek designer at the beginning was van Erp, who also designed the Palace Maimun, but then Dingemans appointed to draft a mosque after van Erp summoned to Java to help the work of restoration of Borobudur temple in Central Java. This mosque construction work began on August 21, 1906, and inaugurated during the Friday prayer on September 10, 1909. 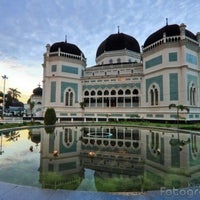 "must visit place in medan"

If you have been to Masjid Raya Al-Mashun, share your experience

Top things to do in Medan

Best places to eat in Medan

Must see in Medan