See all Mosques in Chennai

This Masjid is built by Arcot Nawab Muhammad Ali Walaajah (AD 1749-1795)during 17th century. This mosque and Triplicane Big Mosque both were same design and built together by Nawab. Due to the geographical location and central business district, this mosque is sorrounded by commercial establishments and losts its majestic look and being considered as one of the commercial building in Angappan Naikkan Street.
This very old mosque is located in angappa street, chennai. It stretches from angappa street and covers entire width upto linghi street. It is also commonly referred to as the big mosque. 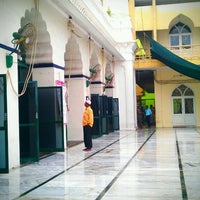 If you have been to masjith mamoor, share your experience