See all Things to do in Hyderabad

Mecca Masjid is near Charminar in the old city of Hyderabad is the biggest mosque in the entire south India.In the sheer size it ranks third in the country, next only to Jama Masjid in Delhi and the one at Gulbarga. Though Quli Qutb Shah laid the foundation stone for Mecca Masjid in 1614, it was Emperror Aurangzeb who completed its construction in 1687.Anestimated 10,000 devotees can offer prayers in the vast hall measuring 67 X 54 meters. Though Quli Qutb Shah , gave the name " Baitul Atiq " to this mosque ,a few bricks brought from Mecca ( and still displayed inside the mosque) perpetuated the name " Mecca Masjid " for this place of worship. 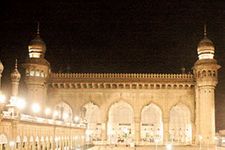 If you have been to Mecca Masjid, share your experience