See all Museums in Bangkok

Monument / Historical Building  ,  Historical Museum  and  Historic Site. War Saket was previously named Wat Sakae and built during the Ayutthaya Period.  During the reign of King Rama I the Great of the Royal House of Chakri, the temple had been renovated and renamed as Wai Saket meaning to wash.  The name comes from when King Rama I the Great was Somdet Cheophraya Maha Kasatsuek and led his army to defeat rebels in Thon Buri toward the end of Taksin the Great's reign.  On return from the battle, he stopped at the temple to wash. King Rama III had ordered the building of a stupa with a base of 12 redented corners (known as "Yo Mum Mai Sip Song" style).  The construction was not finished until the reign of King Rama IV who had changed the design to be a mountain-Iike shape with a Chedi on top.  The chedi was named Boromma Banphot.  The construction was fully finished during the reign of King Rama V the Great.  Inside the Boaromma Banphot are relics of the Lord Buddha.  The main chapel contains murals panted by skillful craftsmen during the reign of King Rama Ill.  The chedi is commonly known today as Phukhao Thong (or the Golden Mount). 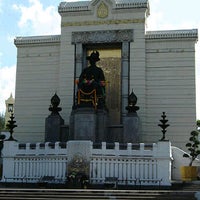 If you have been to Memorial Memorial King Rama the Great skyline, share your experience