Giordano Bruno was sent to the pyre in Campo dei Fiori in February 1600. It was not, unfortunately, the only execution to take place on the site but was certainly the most famous. A monument dedicated to the philosopher and designed by Ettore Ferrari was raised in the centre of the square in 1887. The statue is made from bronze and stands on a stone base decorated with scenes from the life of Bruno as well as other figures from history described as heretics, including Erasmus, Tommaso Campanella, Paolo Sarpi, and Luther. Bruno is shown standing covered and hooded by a long cloak; the book in his hand is perhaps symbolic of his theories and ideas which were daring for the time and resulted in his terrible death. 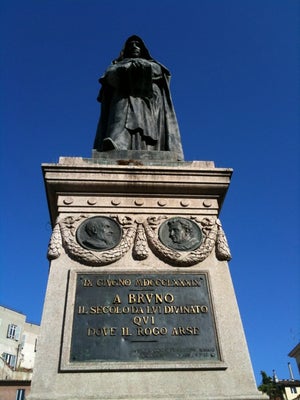 If you have been to Monumento a Giordano Bruno, share your experience