See all Museums in Jakarta

This museum presents the information role of Bank Indonesia in the history of the nation, which began before the arrival of the west of the archipelago to the formation in 1953 of Bank Indonesia and Bank Indonesia's policies, including also the background and impact of Bank Indonesia policy for the community until 2005. The presentation is packaged in such a way to take advantage of modern technology and multi-media, such as electronic displays, static panel, plasma televisions, and dioramas to create comfort in the visitors enjoying the Museum of Bank Indonesia. There are also facts and collection of historical objects in the period before the establishment of Bank Indonesia, as in the past Nusantara kingdoms, which include money numismatic collection also attractively displayed. 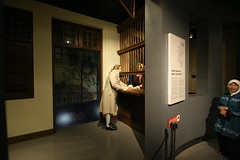 If you have been to Museum Bank Indonesia, share your experience

Top things to do in Jakarta

Best places to eat in Jakarta

Must see in Jakarta