See all Mosques in Kolkata

Nakhoda Mosque is the largest mosque within the city. It can capacitate about 10,000 persons. . Nakhoda mosque is constructed on the lines of Akbar's tomb in Sikandra. Read to know more about the Nakhoda masjid of Kolkata, India. The mosque was named Nakhoda meaning Mariner. The masjid has three domes and two minarets which are 151 feet high. There are an additional 25 smaller minarets which range from 100 feet to 117 feet high. 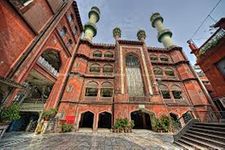 If you have been to Nakhoda Masjid, share your experience