The Nanus or Nanuz fort is located in the Sattari taluka of North Goa. This fort was built in the seventeenth century by the maratha ruler, Shivaji. The fort was later taken over by the Portuguese. Once Dipaji Rane captured the fort, he used it as a military base during the time of early revolts in Goa. From the fort Dipaji rane and his men used to conduct raids in Bardez and Tiswadi and then retreat to Sattari.Later this same fort was captured by the soldiers from the Panjim barracks. The fort today is mostly in ruins and although it is small in size, draws many tourists. 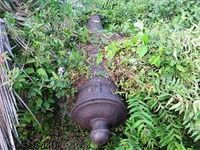 If you have been to Nanus Fort, share your experience