See all Things to do in Rome

Discover history, art and archaeology on this fascinating day trip to Naples and Pompeii. Your journey takes you from Rome to the Gulf of Naples, where Mount Vesuvius erupted in 79 A.D., devastating the towns of Pompeii and Herculaneum. On your full-day tour from Rome you'll travel along the Highway of the Sun, crossing the area known as Castelli Romani dotted with enchanting medieval villages. During the journey you will pass the ruined Abbey of Monte Cassino, destroyed during the Second World War. After a photo stop at Naples' impressive Castel dell'Ovo (Egg Castle), you'll continue across Naples' historic center. You'll pass Naples' historic sights, including the Royal Palace, Basilica of San Francesco di Paola, San Carlo Opera House, Gallery of Umberto I and imposing Castel Nuovo. Leaving Naples, you will cross the valley of Mount Vesuvius, passing through the villages of Ercolano (Herculaneum), Torre del Greco and Torre Annunziata before arriving in Pompeii for lunch. After lunch, you will take a two-hour walking tour of the ancient city of Pompeii with a local guide. A thrilling archaeological journey unfolds as you walk through the ancient ruins which were buried in ashes after Mount Vesuvius erupted almost 2000 years ago. You'll discover the everyday life of Rome's Imperial age at this UNESCO World Heritage Site, and imagine the panic felt by the people in those last few minutes before the city was so disastrously buried. On the trip back to Rome (approximately three hours), you'll stop at a coral and cameo factory, where you will have the opportunity to purchase examples of this ancient craft that dates back to the Greek period. 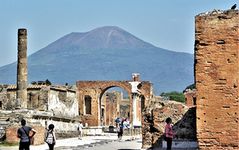 If you have been to Naples and Pompeii Day Trip from Rome, share your experience