See all Museums in Hobart

Narryna is a gem of Australian colonial architecture containing a rich collection of Tasmanian fine and decorative arts. The fine Greek Revival town house was built by Captain Andrew Haig in 1837-40. Haig purchased the Narryna holding in 1824 during a trading voyage between Calcutta, Canton and Valparaiso. Haig built warehouses facing Salamanca Place in 1834 and set up as a merchant and shipbuilder while also operating goods and passenger services to mainland ports. He was forced to sell up after an economic downturn hit the Australian colonies in 1842.Narryna was later home to businessmen and women, lawyers, politicians and bankers. In 1957 Narryna became Australia's first folk museum, thanks to the efforts of a group of Battery Point resident who assembled a collection redolent of the mercantile and maritime histories of Salamanca Place and Battery Point.Ask about our group booking rate and joint ticket with Markree House and Garden, located 200 meters from Narryna and offering insights into Hobart life 100 years later. 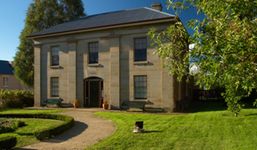 If you have been to Narryna Heritage Museum, share your experience