See all Attractions in Gangtok

Nathula Pass is a mountain pass in Eastern Sikkim, on the Indo-Chinese border that serves as the trade link between India and China. Nathula Pass nestles at an elevation of 14,140 feet and ranks amongst the highest passes accessible by tourists via motorable road. The Old Silk Route through Lhasa, Sikkim and Eastern India used to cross through Nathula Pass. The other side of Nathula Pass is  Chumbi Valley  of Tibet. This mountainous pass is one of the oldest trading border posts connecting Tibet and India. The Nathula Pass is marked by Entrance gates of both countries (India and China) and military bunkers on both sides of the gates. On the Indian side, you would find some fortified military bunkers, a war memorial, an army exhibition centre, a military canteen serving hot tea and fresh snacks to tourists. 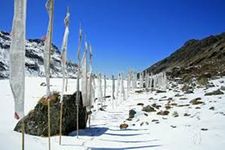 If you have been to Nathula Pass, share your experience